Home / Blog / Tuscany / Our Top 10 Must Visit Towns in Tuscany

Our Top 10 Must Visit Towns in Tuscany 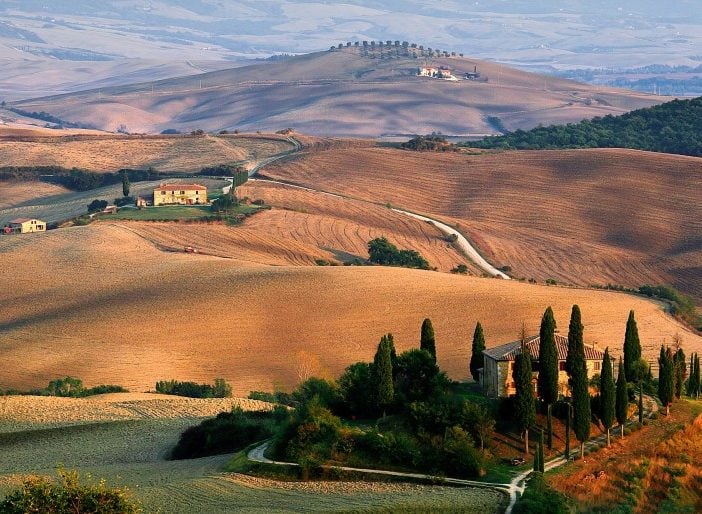 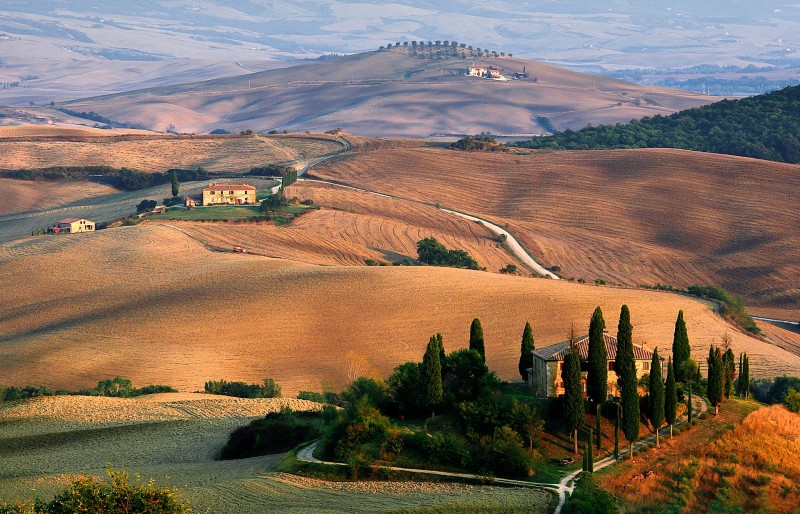 It takes only one glance at the Tuscany region to understand why it has charmed artists and writers for centuries. The undulating landscape and charming towns have captured the imagination of people from all over the world, and the many fine art galleries feature beautiful depictions of the Tuscan scenery.

Along with well-known favourites, such as Florence and Siena, there are many beautiful towns that will charm and delight you. Here are some of the most unmissable towns in Tuscany.

Few cities in the world boast as many masterpieces as beautiful Florence, the largest city in the Tuscany region. After all, the city was the birthplace of renowned artist Leonardo da Vinci, so it is only fitting that it is home to some of the world’s best art museums, galleries and fine art works such as Michelangelo’s David sculpture. 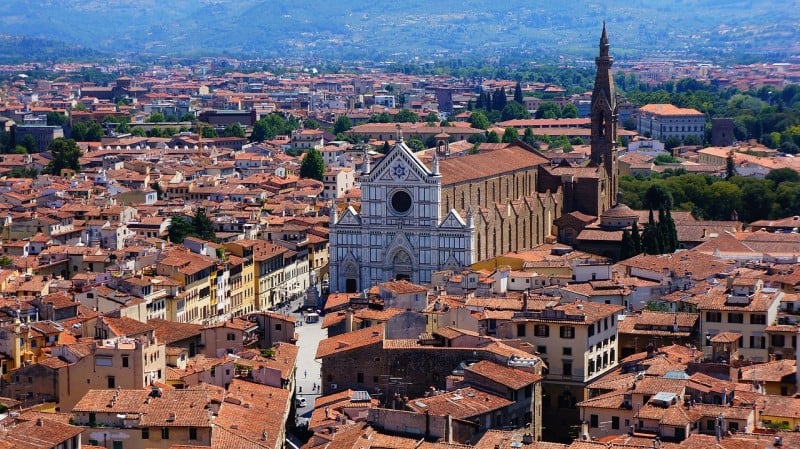 Florence is also brimming with architectural masterpieces. While it seems that every street is lined with stunning buildings, perhaps the most famous of all is the terracotta-tiled dome, Duomo, which is an instantly recognisable symbol of the city and can be viewed from our holiday villa, Dimora Bellosguardo. Florence simply bursts with romantic and creative energy, and it’s certainly an unmissable place in Tuscany.  For more about Florence’s best attractions read the full article.

Pass through the walls of Siena and into the heart of Medieval Tuscany. The UNESCO heritage site is classic Italy at its best. The city is believed to have been founded in Roman times, and is cloaked in history – every street, building and piazza tells a story.

It has an irresistible quality that has visitors head over heels. A visit to Tuscany would not be complete without visiting beautiful Siena.

Terracotta coloured buildings cram the lean, cobbled streets and open out to pretty piazzas. If you view Siena from above, it has a distinctly circular form. And you understand why when you’re on the ground as all roads lead to Piazza del Campo (the central square, which is round).

While it’s a magical place to visit at any time, it is particularly vivacious during Il Palio, a horse race held twice a year (July 2nd and August 16) around the main square, Piazza del Campo. If anything portrays Siena perfectly, it’s Il Palio.

With its dramatic Medieval towers, San Gimignano boasts a seriously impressive skyline that defies its modest size. Originally built for local families to show off their wealth, today several of the towers can be climbed to get a sensational view to the picturesque countryside. 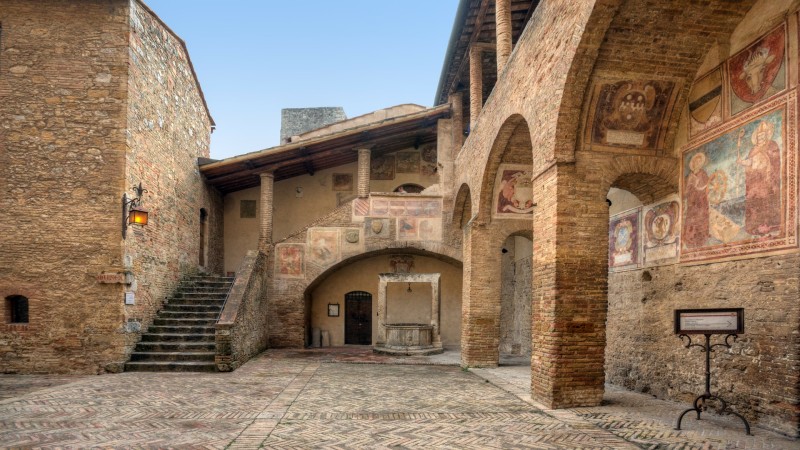 The third UNESCO heritage site on our list, San Gimignano is encompassed by 13th century city walls, and centres around the Piazza della Cisterna.  One of the must-see sites in San Gimignano is the Santa Fina Chapel, home to the Ghirlandaio frescoes.

From Medieval art to contemporary, the Continua Art Gallery is the place to view the works of emerging artists and established contemporary artists. The space is a real treat for art connoisseurs. And continually breaks boundaries in the art world.

Wine lovers should not leave San Gimignano without first savouring the local wine, Vernaccia di San Gimignano. Originating back to the Renaissance period, this is one of the few white wines produced in Tuscany, and its one of the region’s greats.

While much of Tuscany has a varied and fascinating history, beautiful Volterra is particularly interesting. Dating back from the end of the 4th Century BC, Volterra has its roots in the Etruscan occupation. The city is truly like an open-air museum. Nestled atop a hill, the walled city has since been influenced by several different civilisations, most notably, the Romans.

Visitors can still view parts of the magnificent fortified walls that were built to protect the town centre, and open pastures beyond. The gates of Porta dell’Arco and Porta Diana are especially well preserved.

Wandering down narrow Medieval streets, you’ll find impressive examples of the various civilisations that have occupied Volterra through the ages, including the 11th century Duomo (Cathedral of Santa Maria Assunta), an impressive cathedral with origins dating back to the 11th century. Also on your list should be the Etruscan Acropolis and the beautiful hilltop Medicean Fortress, which is now a prison; the Roman amphitheatre, and art lovers must visit The Pinacoteca Art Gallery.

Central to Volterra is Piazza dei Priori, where all life congregates, and where you’ll find the impressive Palazzo (palace) dei Priori.

Volterra is renowned worldwide for creating objects from alabaster, which you’ll find on sale in most souvenir shops through the city.

Not too far from Pisa, Lucca enjoys an enviable location, with the Versilia Sea to one side and the Apuan alps on the other. The city is encompassed by Medieval-era walls which are some of the best preserved in Tuscany, and have been converted into a pedestrian promenade, which can be walked or cycled. Trees and grass border the paseo, which gives the feeling you are taking a stroll through the park. A park with the most magnificent views to the town and countryside beyond. 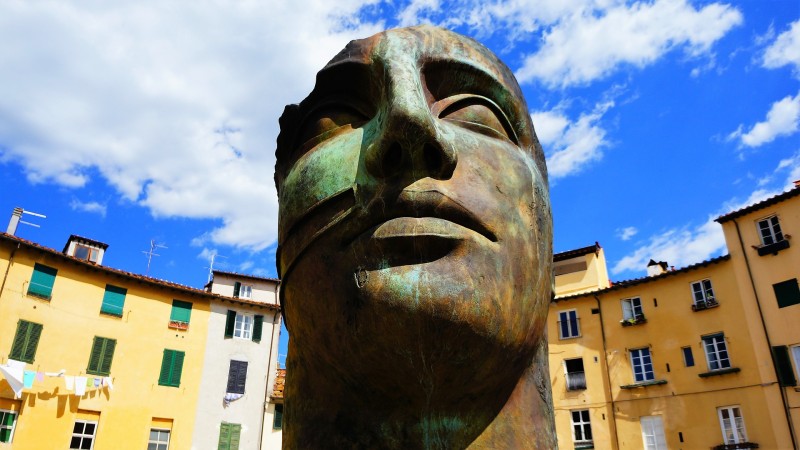 Lucca is one of the few Tuscan towns which is not set on a hill, and this makes the perfect day trip for travellers with less mobility. The city is immaculately preserved and is a wonderful place to immerse yourself in classical Tuscany.

Exploring the city’s historic treasures is a pleasure, but there are many hidden attractions that are worth discovering. You can get around the town in a day if you skim the most important attractions, such as the Roman amphitheatre square (Piazza dell’Antifeatro), the curious Torre Guinigi (Tower), which is crowned with trees, and the Piazza Napoleon – also known as Piazza Grande, this is an especially magical place if you are visiting at Christmas time.

A guide to Lucca wouldn’t be complete without mentioning that it’s home to 101 churches! Two examples that are a must to add to your agenda is the 12th century Saint Giovanni and Reparata, which has a Roman archaeological site beneath and Il Duomo (St Martin’s Cathedral.

It’s difficult to think of a more picturesque setting for a natural spa than stunning Saturnia. The town itself is delightfully charismatic, but it’s the enticing natural spa that really sets it apart and makes it a must-visit in Tuscany.

Just outside the town, a thermal pool bubbles, cascading down over several rocky pools. It’s free to access the springs, known as Cascate di Mulino. They are extremely ancient, said to date back beyond pre-classical populations of Greece. Remains of the many civilisations that have inhabited Saturnia can be found Bagno Santo (the Holy Bath) and the archaeological museum.

The mineral rich waters of the spa are relaxing and therapeutic, with an average temperature of 37.5°C. It’s a magical addition to an enchanting town, and a perfect day trip to rest your weary feet after visiting some of the must-see towns of Tuscany.

Almost a thousand years have passed since beautiful Buonconvento was formed, however, the town seems not to know it. It’s almost frozen in time, with its stonework, historic flags which represent the four districts of the town, and ancient heavy doors that open .

Located in the Val d’Orcia, Buonconvento is considered to be one of the most beautiful towns in Tuscany. And it’s name derives from the latin, bonus conventus, which translates wonderfully to ‘happy, lucky place’!

Life here is generally peaceful. However, the town does become more lively in September, during the festival Sagra della Val d’Arbia, a festival that combines music, art, sport and the region’s delicious gastronomy. Making it an ideal time to experience the city.

A visit to Buonconvento would not be complete without going to see the Palazzo Ricci (Palace), the Church of San Pietro e Paolo, the Museo di Arte Sacra (Sacred Art Museum), and the Museo della Val’Arbia, which houses works by Matteo di Giovanni and Sano di Pietro.

Panzano in the Chianti region is a historical village with a modern edge. Caught in the middle (both geographically and historically) between Florence and Siena. It was literally torn apart several times over three centuries by the two feuding cities.

However, life is now sweet in Panzano and that’s mainly thanks to the fact that is surrounded by vineyards and wineries that have been producing delicious Chianti Classico wines for generations. Yes, if you are a wine lover, Panzano is an absolute must on your Tuscany bucket list. Especially for the annual Vino al Vino (Wine to Wine) wine festival which takes place every third weekend in September.

One of the highlights of a day trip to Panzano is visiting the Macelleria Cecchini district where generations of butchers have been serving the finest meats and produce to locals and visitors alike. One such butcher is the charismatic, Dario Checchini, who has opened several restaurants where you can eat a great three course meal from 10 € upwards.

The maestro! Video courtesy: Friday Magazine
When Dario is in the house he’ll happily recite quotes from Divine Comedy (Divina Commedia). You can enjoy a stand up aperitif in his shop, or a sit down meal in one of his restaurants.

There’s no bad time to visit Panzano, but the Sunday Farmer’s Market is a particular delight. Where you can buy local produce, clothes and even delicious roasted chicken for lunch. Or head to the main square for lunch in one of the bars and restaurants that line the piazza and surrounding streets.

Beautiful Arezzo is one of Tuscany’s most affluent towns with a long tradition in goldsmithery. It’s also one of the oldest towns in the region, with archaeological finds dating life back to the Paleolithic era. 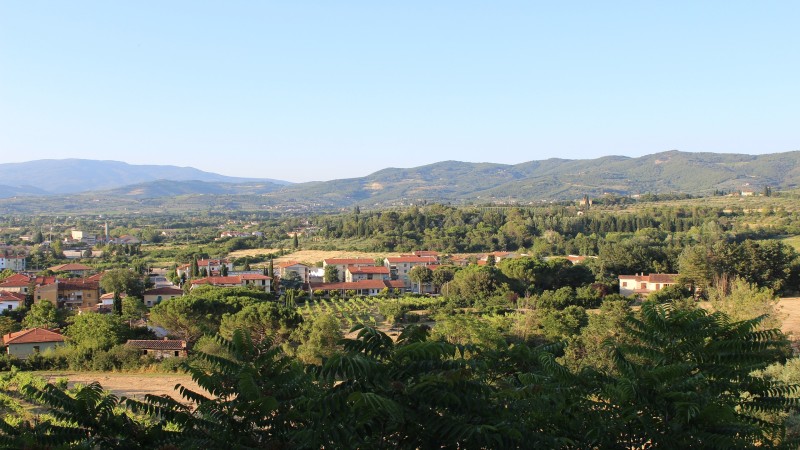 Jump forward to the Roman empire and Arezzo was one of the most important towns in Tuscany, holding a strategic position on the Roman Via Cassia (Cassia Road). Today the town retains its historic heritage, with many fine examples of Roman and Renaissance architecture.

Don’t leave Arezzo without having visited The Church of San Francesco, where there are some magnificent examples of early Renaissance frescoes by Piero della Francesca. Or climbed the clock tower of the Palazzo della Fraternita dei Laici and wonder at the amazing views to the city and beyond. Head to the Piazza Grande (main square) for a bustling look at everyday life in Arezzo.

Arezzo doesn’t tend to make a lot of noise and fuss. But the city does transform itself on the first Sunday of every month, for its antique market. This market sees the city’s cobbled streets transformed into a maze lined with fascinating trinkets and treasures. It’s the perfect place to find a magical reminder of your time in Tuscany, or simply enjoy the lively atmosphere.

In a region famous for its delicious food and wine, Greve is a stand-out. Nestled in the heart of the famed Chianti region, the town is a haven for wine lovers and those who appreciate fine traditional cuisine.

The charming town is small but with a rich history, it’s got more to it than stopping off for a couple of glasses of Chianti. It all started with the Castle of Montefioralle, which sits above the town. Greve served as the castle’s marketplace, and was also at the crossroads of three pilgrimage roads.

Greve still holds a lovely market every Saturday in the central Piazza Matteotti which has a wonderful portico along three sides, which houses lovely boutique shops, artisan craft stores and restaurants. One to visit is Falorni Butcher Shop, which has occupied the same spot since 1729 and serves delicious Tuscan delicacies. One to try is the innovative gelati; inspired by traditional Italian dishes of prosciutto with melon, salami with figs, and cheese with pears, the gelati is an unusual (yet delectable) way to enjoy the tastes of Tuscany.

Sign up to our newsletter for tantalising insider tips on our favourite Italian destinations.