Tuscany for your next Italian beach escape? Here’s why… 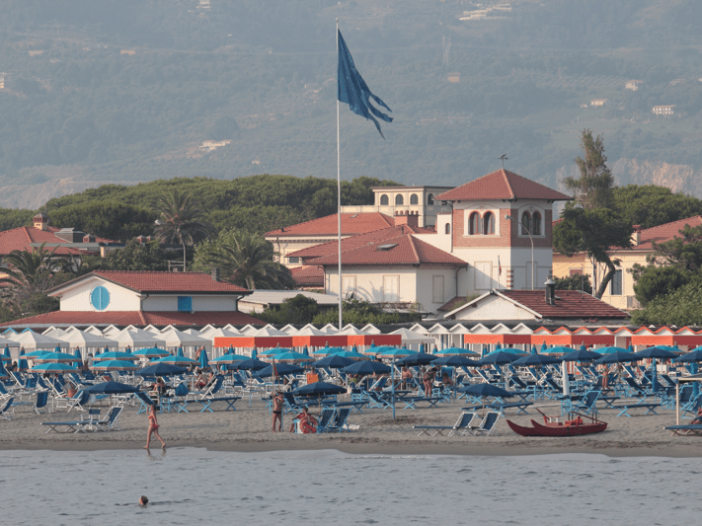 When one thinks of Tuscany it’s normally of rolling hills and picturesque villages, the fabulous cities of Florence, Pisa and Siena; a region rich in artistic and gastronomical heritage. So much art, so much history, it’s easy to forget that Tuscany also has a whole lot going for it down on the coast.

Boasting one of Italy’s most spectacular and diverse coastlines, the Tuscan coast stretches for 250 miles, shifting from stripy deck chair chic, to swathes of unspoilt dunes, and the rocky bays and coves where languid yachts drop anchor and bask in the crystalline waters of the Mediterranean, under the warm Italian sun.

It doesn’t get much better than a Tuscany beach holiday, and if you need more convincing, we’ve rolled everything Tuscany has to offer into one trip, and voila we present the perfect Italian beach holiday.

Affectionately known as the Tuscan Riviera, the coastline of Versilia in the northwestern corner of Lucca, is popular with fashionistas, captains of industry and those looking for a super cool summer beach hangout. The coast attracts visitors for its golden sandy beaches, and calm seas, nightlife and boutique shopping. And there’s plenty of all of that in the quintessentially Italian town of Forte dei Marmi.

Forte dei Marmi is also an excellent base for those who want to explore the rest of the Versilia region during their stay. The town provides the perfect Tuscan holiday base, combining beach chic with the opportunity to explore the highlights of Tuscany’s culturally rich interior. Florence, the birthplace of the renaissance movement is just 90 minutes drive, and in no time at all you could be gazing at the leaning tower of Pisa, or wandering the ancient streets of Lucca, both are under 40 minutes away by car.

If you don’t want to stray too far from home, there is plenty to see and do along the coast. The town of Pietrasanta might only be 15 minutes drive from Forte dei Marmi, but the town is a world apart from the glitz of the coast. Known as the Little Athens of Italy, Pietrasanta is a charming medieval town, set between the Apuan Alps and the Mediterranean sea. Since the 12th century artists have come from far and wide, originally inspired by the Versilia artistic marble-working tradition, this is where Michelangelo learnt his trade.

The coast of Versilia also has a history steeped in art and culture, the main seaside resort of Viareggio dates back to the 13th century, and was the original port city, with an old fort that protected the Versilia region from marauders. Four centuries later and the old port town developed into a fashionable tourist destination thanks to Napoleon Bonaparte’s sister, Paolina Borghese. The town is also celebrated for its artistic heritage, and for one of the world’s most colourful and spectacular carnivals.

Sandwiched between the Apuan Alps and the Mediterranean, the Apuan coastline is the favoured destination for those seeking the ultimate Italian beach vacation.

To the northern end of the Apuan coastline, the landscape shifts dramatically from overhanging cliffs, which dip down to the azure sea, to wide stretches of sand. The views are breathtaking: a panorama of mountains and Mediterranean, dotted with seaside villages and traditional Tuscan villas. High class resorts aside, the Apuan coastline is also rich in the culture and traditions of Tuscany.

The beach resort town of Forte dei Marmi is one of the highlights in this symbiosis of Mediterranean charm. It is one of the most exclusive holiday destinations in Italy, which means you’ll be rubbing shoulders with VIPs, movie actors, fashion royalty; maybe even an opera singer or two…

It’s easy to fill up your holiday with beach, art, architecture and culture when you travel to Tuscany, but we highly recommend you take a day or two to explore Tuscany’s interior, with its medieval villages surrounded by vineyards and olive groves. Set amongst undulating hills and Cypress forests.

If you are staying in Forte dei Marmi take your pick and visit any of these beautiful Tuscan hill towns in under two hours:

Poor Calci had no choice but be caught up in the medieval wars between Florence and Siena, being strategically in between the two. Lying at the foot of Monti Pisani, the farming commune of Calci is a peaceful town, surrounded by terraces of olive groves and overlooked by Monte Serra. On a clear day you can see to Pisa and the islands of the Tuscan archipelago.

Set in a nature reserve of extreme beauty, Orrido di Botri is a canyon gorge that has been carved out of the limestone landscape over many centuries. The scenery is spectacular, walk along the dry riverbed from Ponte a Gaio, along to the gorge itself. 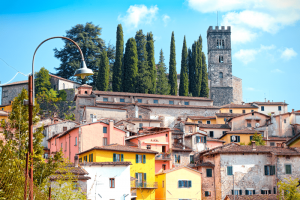 How to describe Barga ? Renaissance architecture and Florentine Duomo backed by snowy Alpine hills with a twist.

Visit Lucca just to marvel at the encircling Renaissance stone bulwark, the best preserved example in all of Tuscany. The walls are covered in Cypress and Eucalyptus trees, and capped in greenery, making it entirely walkable.

In the heart of the Apuan Alps, lies the charming town of Fosdinovo. There is so much to love about Fosdinovo: spectacular views to the Tyrrhenian Sea, charming trattorias, serving

Stop the press! There is no such thing as Italian cuisine. Each Italian region has its own cuisine, its own emblematic dishes, and here in Tuscany, the accent is on rustic fare, Cucina Povera (poor/peasant cooking). ‘Poor’ in name, but so rich and flavourful. Simple ingredients and inexpensive local ingredients make the most hearty of stews, soups and pasta dishes.

Ok, we admit that there are certain dishes that are enjoyed all over Italy. In Tuscany, as in many other regions, meals might commence with antipasto of cured meats, or a simple platter of cured meats (affettati misti); another popular starter is crostini di fegato – finely sliced toast with liver pate.

In Italy, soup isn’t always a starter, in the cooler months, it can also be served as a healthy and hearty main course. Try ribollita – a typical vegetable and bread soup, Pappa al Pomodoro, a delicious tomato soup, or zuppa di fagioli (Cannellini bean soup).

In fact it’s unusual to find a menu without Cannellini beans in Tuscany. The Tuscans are affectionately known as mangiafagioli (bean eaters). Fagioli con salsiccia is one such dish, made with Cannellini beans and Tuscan sausage. Divino!

Don’t worry if you are a #pastaphile. There are plenty of delicious pasta dishes on the local menus. Tagliatelle al tartufo (above), pasta covered with truffle sauce is one of the region’s prized pasta dishes.

When in Tuscany, it would be rude not to seek out one of the region’s many festivals that take place throughout the year. You might even want to plan your trip around one, as the festivals of Tuscany are a highlight for many towns, some dating back to medieval times.

If you come alive in a carnival atmosphere, head to the Viareggio Carnevale (above), which takes place in February and March. The carnival is world renown for its massive paper maché floats, which are designed and built each year.

Just 25 minutes from Forte dei Marmi is Torre del Lago, home of the annual Puccini Opera Festival, which takes place through July and August. One of the most important dates on the opera calendar, over 40,000 opera enthusiasts visit the festival each year.

The Bravio delle Botti, a barrel-rolling festival, takes place in Montepulciano during the last week of August.

If you are craving a beach holiday. Italy and the Tuscan coast beckon. Villa Monti di Luna, in Forte dei Marmi is the perfect luxury vacation base from which to explore the best of Italian art, culture and cucina Toscana.